You guys! My new YA thriller, "This Lie Will Kill You," comes out in a month and a half! And I recently acquired an ARC of "Two Can Keep a Secret" by Karen M. McManus (author of "One of Us Is Lying.")

What do you think? Shall I give away BOTH?! 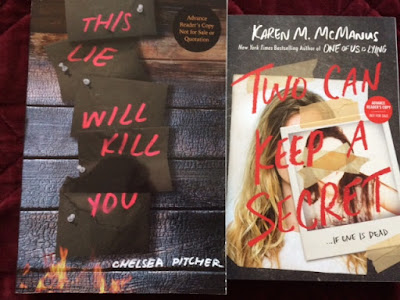 I think so too. And, just for fun, I'll throw in a $10 Amazon gift card as well! Check out the description of my book, out December 11th from Simon & Schuster/McElderry, then enter the Rafflecopter to win!

This Lie Will Kill You

One year ago, there was a party.
At the party, someone died.
Five teens each played a part and up until now, no one has told the truth.

But tonight, the five survivors arrive at an isolated mansion in the hills, expecting to compete in a contest with a $50,000 grand prize. Of course . . . some things are too good to be true. They were each so desperate for the prize, they didn’t question the odd, rather exclusive invitation until it was too late.

Now, they realize they’ve been lured together by a person bent on revenge, a person who will stop at nothing to uncover what actually happened on that deadly night, one year ago.

Five arrived, but not all can leave.

In the spirit of Karen M. McManus, Lois Duncan and Christopher Pike, this twisted, spine-tingling thriller will leave you wondering – will the truth set these teens free? Or will their lies destroy them all?