I AM HAVING A CONTEST!
(In which I give away various books)
Why?
To celebrate the launch of my website and upcoming novel,
“The S-Word,” due out in 2013 from Gallery Books.
WHEN?
The contest beings at 9:00 A.M. ET on Monday, April 23rd and ends at 9:00 P.M. ET on Friday, April 27th. Winners will be announced the following week.
HOW DOES ONE ENTER?
Simply Follow @Chelsea_Pitcher
on Twitter and tweet about the launch of my website (including the url: www.chelseapitcher.com and my twitter handle: @chelsea_pitcher).
For example:
Tweet

But please be advised:
You Can Word It However You Want.
If you don’t have a Twitter account, you can also enter by following me here on blogger. Just click the “join this site” button (near the top right of this page) and leave me a comment on this post letting me know how to contact you if you win.
GET TO THE PRIZES, ALREADY.
There are four titles you can win: three sparkly new hardbacks from my personal collection and two gorgeous paperbacks from my awesome editor Adam Wilson. And yes, I know that adds up to five (I am not that terrible at math), the paperbacks are both the same.

1. BLACK HEART by Holly Black
In the final installment of the Curse Workers Series, con-artist Cassel is determined to be a good guy, but his past keeps getting in the way in the form of shady family members, the Federal Bureau of Investigation, and the mob-boss in training who happens to be the love of his life. Just try to put this book down once you’ve picked it up. I dare you.

2. SHUT OUT by Kody Keplinger
The battle of the sexes is ON in this witty and thought-provoking retelling of Lysistrata. Whether you’re on Lissa’s side, Cash’s team, or just cheering from the sidelines, watching the battle unfold is a wicked delight.

3. PINK SMOG by Francesca Lia Block
From the immensely talented author of  DANGEROUS ANGELS: THE WEETZIE BAT BOOKS comes the much anticipated prequel, in which Louise-turned-Weetzie comes of age, and becomes straight-up fabulous, while re-learning to believe in the magic of love.

4. and 5. LOVE STORY by Jennifer Echols
When Erin moves from Kentucky to New York, she doesn’t expect to be tracked down by the stable boy of her fantasies. She certainly doesn’t expect him to show up in her writing class right after she wrote a steamy story about him.
WHAT IS THE FINE PRINT?
This is MY contest. It is not affiliated with any publisher or agency. The contest is open to all residents of the US (with apologies to my lovely international friends) who are 18 and older. Winners will be selected randomly and will be announced over the course of the week of April 30th. Winners, upon being notified, may specify which book they prefer and (if that book has not already been given to a previous winner) THAT IS THE BOOK THEY SHALL RECEIVE.
Thank you, and have fun!
Posted by Chelsea Pitcher at 1:56 PM 6 comments: 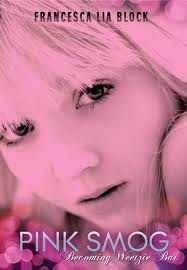 Jacket Copy:
The girl in the mirror wasn’t who I wanted to be, and her life wasn’t the one I wanted to have.
Despite how much Louise insists, no one will call her Weetzie. It’s her dad’s nickname for her, but it won’t stay put. Neither will her dad. Charlie left Louise and her mom and he took everything with him: her family, her home—and her understanding of who she’s meant to be.
But Los Angeles is a city full of strange angels, and Louise embarks on a journey to sift through the smog of her heartbreak, to grow her own wings.
My Review: 5 of 5 Stars
Reading “Pink Smog” was like coming home. I didn’t even know how much I’d missed Weetize until she came back. In this much-anticipated prequel to “Dangerous Angels: The Weetzie Bat Books,” an adolescent Weetzie Bat confronts the fairy tale that so many of us learn as children: that love, when it is real, stays with us forever.
But how can this be? Weetzie’s father has just left. Does this mean his love wasn’t real? Does it mean he never cared for her in the first place? These are the questions Weetzie must face as she navigates a world of strange angels and sinister phantoms, new friends and spiteful enemies. Her mother is little help, devastated from the loss of her husband, and school provides no solace, but Weetzie is fierce and resilient, and in spite of often feeling lost, she remains determined to find herself.
I loved this book so much. Block’s characters are nothing if not survivors, and Weetzie is no exception. I felt for her as she struggled to find her place in the world, rooted for her as she fought to love herself even when those she loved couldn’t stay by her side. I especially loved her relationship with Winter, that strange and elusive neighbor that might’ve been angel, or maybe just a boy, who managed to help Weetzie remain on the right path without making decisions for her. He was just the right kind of friend, and I found myself yearning for his presence just as Weetzie did, hoping he would visit her one more time, tell her a story, sit by her side.
Another thing I loved about this story—the thing that drew me into Block’s novels so many years ago—was the feeling of being fully immersed in the character’s world. We cannot only see it—we can taste it in the food Weetize eats, smell it in the belladonna and jacaranda that paint her world, and feel it as she travels through the streets of Los Angeles on her adventure. Time and time again Block delivers a feeling of lushness, of completeness that keeps me coming back. Here especially, it is both enticing and intoxicating, in this beautiful story of the transformative power of love specifically when it’s ephemeral.
Posted by Chelsea Pitcher at 2:48 PM No comments:

MY PUBLISHERS MARKETPLACE ANNOUNCEMENT!!!!!
And now we celebrate.
Posted by Chelsea Pitcher at 2:21 PM 20 comments: