Review: Charlotte Markham and the House of Darkling by Michael Boccacino 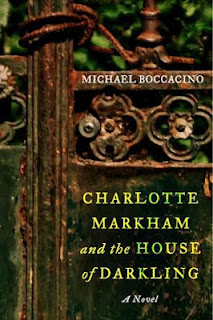 
When the nanny to the young Darrow boys is found mysteriously murdered on the outskirts of the village of Blackfield, Charlotte Markham, the recently hired governess, steps in to take over their care. During an outing in the forest, they find themselves crossing over into The Ending, "the place for the Things Above Death," where Lily Darrow, the late mother of the children, has been waiting. She invites them into the House of Darkling, a wondrous place filled with enchantment, mystery, and strange creatures that appear to be, but are not quite, human.

However, everything comes with a price, and as Charlotte begins to understand the unspeakable bargain Mrs. Darrow has made for a second chance at motherhood, she uncovers a connection to the sinister occurrences in Blackfield and enters into a deadly game with the master of Darkling--one whose outcome will determine the fate of not just the Darrows but the world itself.Charlotte Markham and the House of Darkling is a Victorian Gothic tale about family ties, the realm beyond the living, and the price you pay to save those you love.


Initial reaction: Wicked, twisted, dark and delicious. This was a wild ride!

Overall review: I loved this book so much. Boccacino is a master of descriptions, and I was immediately drawn into the lush dual landscapes of Everton and The Ending. One of the things that delighted me about this story is that Boccacino would lull me into a false sense of security by creating a setting that felt vaguely familiar and relatable, and then wham! Everything shifted, the petals of the story unfolded, and suddenly I found myself staring into a world I couldn’t have anticipated with a plethora of creatures I wasn’t expecting. It was shocking, engaging, and altogether addictive.

Everything about this story kept me guessing. I couldn’t have imagined where things would end up, couldn’t have imagined the things Charlotte would endure and have to overcome. I especially loved the way her character changed and grew over the course of the novel, and I found myself cheering for her as she fought to discover the secrets of The Ending, and uncover the mysterious Man in Black.

There is so much more I can say, but with all the twists and unveilings in the story, I don’t want to spoil anything. Suffice it to say that the jacket description is accurate—this is a story about a governess drawn into a web of death and deceit, and an age-old game that seems impossible to win. But there is also so much more! The characters are richly drawn and complex, the history of The Ending is a delight to discover, the relationships are heartbreakingly real, and the solutions are anything but black and white.

The last third of the book (in other words, the ending) is titled The Ending (but not for the reason you’d think.)

Duncan! I could see his smile so clearly in my mind, and he always had something interesting up his sleeve.

The strange castle with the woman in the aging, decadent dress. So creepy and well-described.The stories-within-the-story. “The Seamless Children” may have been my favorite, but it’s hard to say. They were all great!

In summation: Boccacino has such a talent for writing passages that are deeply sad and at the same time wickedly intriguing. It’s difficult to even articulate the complexity of emotions I experienced while reading this book. A truly engaging, wonderful read!