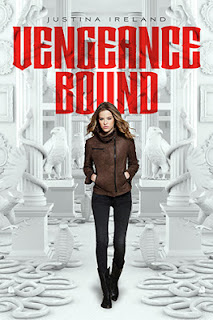 The Goddess Test meets Dexter in an edgy, compelling debut about one teen’s quest for revenge… no matter how far it takes her.

Cory Graff is not alone in her head. Bound to a deal of desperation made when she was a child, Cory’s mind houses the Furies—the hawk and the serpent—lingering always, waiting for her to satisfy their bloodlust. After escaping the asylum where she was trapped for years, Cory knows how to keep the Furies quiet. By day, she lives a normal life, but by night, she tracks down targets the Furies send her way. And she brings down Justice upon them.

Cory’s perfected her system of survival, but when she meets a mysterious boy named Niko at her new school, she can’t figure out how she feels about him. For the first time, the Furies are quiet in her head around a guy. But does this mean that Cory’s finally found someone who she can trust, or are there greater factors at work? As Cory’s mind becomes a battlefield, with the Furies fighting for control, Cory will have to put everything on the line to hold on to what she’s worked so hard to build.

I LOVED this book!!!! From the first page to the last, this book had me on the edge of my seat!! Amelie/Cory is such a relatable character--wanting to be a normal girl with friends, a meaningful relationship and a future, but at the same time drawn to a life where the guilty and the wicked are punished and kept from doing harm. Really, that's what makes this book so special: it perfectly articulates that inner struggle we all face, between wanting to lead safe, happy lives, and wanting to stop terrible things from happening in the world. But if we should act on our desire for justice in a violent way, what does that say about our humanity? Do we remain the humans that we were, or do we eventually become monstrous versions of ourselves?

I loved, loved, loved the Furies! (Maybe a little too much.) They were so wonderfully drawn. I could really see Tisiphone's massive wingspan, hear Megaera's scales sliding across the floor, and feel the terrible heat that their presence invoked. Ireland definitely does justice to the mythology!! I loved, too, how their grip on Amelie affected her appearance. That was totally creepy and cool at the same time.

I thought that Amelie's relationship with Niko unfolded nicely--layer by layer. I loved, too, how complicated it was for them to be together. Both characters were so affected by their families, their pasts, and their current situations. This book really shows how hard it can be to balance love with our other obligations and relationships. So realistically done!!

The ending of the story was really satisfying to me. Without saying too much, I didn't expect certain things. I love when a writer is able to surprise me, while at the same time creating a conclusion that's believable, and Vengeance Bound accomplishes this in spades. I honestly can't wait to see what Ireland writes next. This was SUCH a great read.